‘revelatory and inspirational … Jenkinson is a must-see because of her technical excellence, ability to create beauty, and rare personable flair for drama.’
– Johnny Ray Huston, SF Bay Guardian

‘Uncompromised vision, inner tension, and an adoring public: These are the ingredients of greatness.’
Hiya Swanhauser, SF Weekly 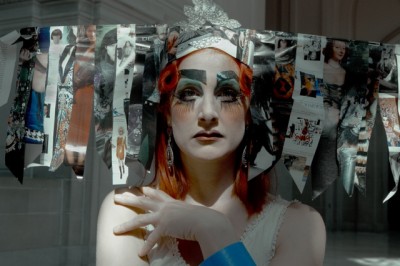 Fauxnique made herstory as the first cis-gender woman to win a major drag (queen) pageant. Honors include an Irvine Artist Fellowship at the de Young, Guardian Outstanding Local Discovery (GOLDIE) Award, SF Weekly’s ‘Best Performance Artist,’ 7X7 Magazine’s ‘Hot 20,’ Isadora Duncan Dance Award and Theater Bay Area Award nominations, CHIME and CHIME Across Borders and residencies at Atlantic Center for the Arts and Headlands Center for the Arts. She engaged in embodied conversation with Gender Theory pioneer Judith Butler and facilitated a talk with RuPaul bestie Michelle Visage in the space of a week.

Jenkinson has created curriculum and taught at San Francisco Art Institute and St. Mary’s College of California and her writing has appeared in Dance History Scholars’ Newsletter and on literary site Her Kind. She is writing a drag memoir.

Informed both by a tradition of radical queer performance and theory, and by classical ballet training, my work always comes from a physical place, and often uses drag to consider the performance of femininity as a forceful, vulnerable and subversive act. I create and perform from the fervent belief that embodiment does what cannot be said or theorized.

I emerged out of a feminist, postmodern, improvisational dance and choreographic lineage, but grew toward a tradition of radical queer performance that uses decadence and drag both to entertain and transcend. Yvonne Rainer said ‘no to spectacle’ so that I could say ‘yes’ to sequins. Rather than reject the traditional trappings of performance and the performance of femininity, I embrace them. My practice of feminism celebrates glamorous women as masters of artifice, and my intimacy with both the oppressive and empowering effects of feminine tropes allows me to create a zone of play from which I make my particular critique.

Since 2003 I have been deeply engaged in an ongoing performance project, Fauxnique, my drag queen persona. My short, sharp, entertaining drag numbers dovetail with theatrical works by showing the classical rigor and specificity of my movement exploration; transcending their pop form. As a lens through which I magnify my artistic concerns, Fauxnique typifies and expands a particular evolution of drag-based performance that goes beyond camp show-tunes into the realms of punk, horror, high drama and gender subversion.